You are here: Home / Blog / Are police scanners legal or illegal in Your State? Key Things to Know!

Police scanners are very common and most of us use it. But do we really know about the legal aspects of using a radio scanner?

Yeah, a lot of us have gone through this stage- deciding whether the police scanners are legal or illegal in our state. But the good news is that Police scanner is legal to use for most the cases. However, there are certain restrictions, as listed below:

Again, these restrictions don’t apply to all the states. We will come to this in a while.

Before that, if you don’t fall into any of the above categories,  I recommend you to have a look at the list of top police scanners as per CB Radio Guru. 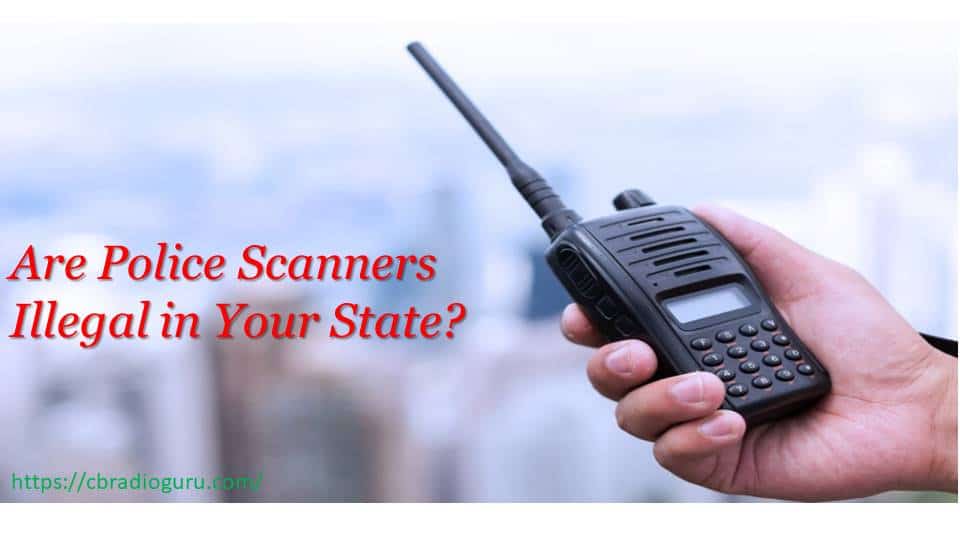 Police scanner apps? Well, when we speak of apps in this 21st century, they are only supported by smartphones. These applications let a normal human being listen to all local and distant emergency frequencies in his/her smartphone.

So how does it work?

Our smartphones are not smart enough to receive high-end private radio signals. There are people having a license to access and receive police scanner transmissions. Encoding these transmissions and then using the internet to spread it can make it play in any corner of the world.

These scanner apps then stream the transmissions from the internet and play it for us. The technology sounds interesting, but as we all know that there are two sides of a coin, this tech has both positive and negative aspects.

On the other hand the hardware version- the real Police scanners do all these tasks themselves. We recommend you to have an actual radio scanner rather than going for a software version. But the law is the same for both.

Is it really legal to use these apps for personal purpose?

The scanner applications can be used for many purposes: –

While there’s a lot of fun in it, using these apps in an illegal manner can cost you a huge price. There are places in the United States of America where using such radios and apps may be considered as illegal.

What states are Police Scanners illegal?

As we have already told in the introduction, these radio scanners are not illegal to use in the United states, unless you use it while driving or to conduct a crime.

Let us see both the scenarios one by one.

1. States in which Radio Scanners are Illegal to use while Driving

There were days in which it was easy for public to evade from speed traps by listening to the police scanner communications. So, the states given below have decided to make it illegal to use them while driving:

2. States in which Radio Scanners are Restricted in the Furtherance of a Crime

Coming to the second scenarios, the following states have legal issues in using Police scanners in frutherance of a crime:

If you are not in any of the above states, you’re good to go. You can find some of the best from the table below:

If the radio is your passion then you must have a proper license to support it. Only then can you use such apps and radios in most of the provinces.

You must keep yourself updated with the latest laws regarding such transmission scanning applications. Contacting a lawyer to get a personal license for receiving all kinds of radio transmissions is the only way to keep you on a safe side.

‘Is it illegal to have a police scanner?’

No, absolutely not. You have every right to use them in the United States except for the two activities mentioned above. Even that restrictions are applicable on few states only. If you’re not from any of the states, you are getting a great tool to listen to two-way radio communications.

Yea, it’s fun. But more than the ‘fun’ part, these scanners help you in emergency situations in your neighborhood.

In many places around the world, this tech is leading to a lot of crimes. Such scanning apps are used in crime partnership, where one listens to the police transmissions while the other remains involved in the burglary. Using police transmissions in an illegal manner hence costs a lot of charges. So be safe while using these applications and we urge you not to do anything stupid even if the law permits in your state.