Coming from the esteemed CB radio from Galaxy brand, Galaxy DX 979 is a small and styling-range range mobile CB radio which is capable of satisfying every driver. Just like other models of Galaxy, Galaxy 979 AM/SSB mobile radio is no exception in features and performance. Truck and car drivers often use this radio in their vehicles, while traveling by the road, driving in and out of the mines and at their base stations. 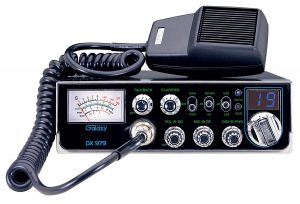 You will love the features I am going to list out next.

In this world of technology where things change fast, old technologies are upgraded or replaced by the new ones. Every day there is a new brand launch in the market with more features at a relatively cheap price, while established companies introduce something new all the time to remain it the competition.

In the world of CB radios though, so far only one name has survived with their high performing products, list of features, satisfactory customer services and all this at a competitive price.

The best part of this AM/ SSB CB radio is, it is smaller than the other Galaxy radios without the lack of performance and features, so while installing this radio in your vehicle drivers do not have to worry about its weight.

DX 979 CB radio is designed with driver-friendly features and is easy to use even for the new users. It comes with several useful controls, each knob and button knows its functionality and controls its own task so the user does not have to go through the menu again and again, hence making this CB radio driver friendly.

The signal transmission and receiving strength is prominent and unlike other Galaxy radios, this radio is smaller with all the features one could ask for.

DX 979 is most recommended AM/SSB radio within truck and car drivers both on and off the road.

It works on AM/ SSB and PA modes. Galaxy has provided a modulation percentage scale to use the mobile CB radio on AM mode. Signal strength scale indicates incoming signal up to 60dB over S9. With the Starlite faceplate, drivers can use DX 979 in nighttime also; all the letters are backlit, which makes it easy to use knobs and buttons. If you feel these letters too bright, you can always dim the light or completely dark it out with the dimmer control of DX 979.

Noise blanker and auto noise limiter circuits of DX 979 CB radio helps you control the noise and you can hear the sound loud and clear. DX 979 also comes with receive (RF) gain control and mic gain control. It also has a mid-sized chassis with the front mic jack and rear jacks for external speakers.

You will love the high SWR alert circuit with warning. The Talkback feature comes with ON/ OFF switch along with volume control and variable power output control.

Good CB for all Vehicles

DX 979 not only performs best in trucks or cars but it can be used in jeeps as well. This CB radio sounds loud and clear without cutting in between even in the noisy environment of jeeps, so that’s definitely a plus point. It also works well on sideband, so the sideband users can use it without any problem.

DX 979 is easy to modify and its big meter is convenient and easier to read while driving. So many interesting features but still wish it would have a Roger beep? Don’t worry, it has an open spot on the circuit labeled ‘RB’. If you want, you can solder a jumper in the holes and you have your inbuilt Galaxy Roger beep.

The transmitting and receiving signal quality of DX 979 CB radio is significant and users have used this radio within 30 miles to communicate to other people without any drift or muffled sound.

Although this CB radio works well in almost all weather conditions on AM mode, while using it on SSB mode, change in weather affects its performance a bit. In addition, the mike that comes with this radio is much bigger for in-dash mounting in many applications. But that won’t be an issue in using this CB radio. Thousands of good CB mics are available at affordable rates. (Check best CB mic reviews)

With high transmitting and receiving audio performance, loud and clear sound, smaller size, talkback features with ON/ OFF switch and reasonable price, DX 979 AM/ SSB CB mobile radio is a great choice as your primary CB radio for your journey on the road and also to use it at your base station.

If you want all the features of a CB radio in a smaller package, DX 979 AM/SSB mobile CB radio is a really great option. The microphone is handheld and due to the smaller size and front mic jack, this CB radio is relatively easy to install in a vehicle and the best part, it works well even in jeeps, which is comparatively noisy that the other vehicles, the sound is loud and clear even in a noisy environment of jeep.

Due to its interesting features and performance, DX 979 is one of the widely used CB radios by the truck drivers and most recommended by its users.