Galaxy radios are known for their high performance and easy to use interface. Well, today I’m going to introduce you to one of the best CB radios by Galaxy– it’s Galaxy DX 949.

Like every other Galaxy radios, Galaxy DX 949 is designed for a driver-friendly experience. This one is easy to use even for the new users. You will get amazing signal strength with this CB radio. I would say that this is a nice CB radio to have for rigs and trucks.

Many drivers working at mines have found this mobile CB radio very useful than the other CB radios with a great performance.

In this article, we will see what makes this CB radio an awesome one to use.

If you’re in a hurry to check out the price and customer reviews, click below for the authorized dealer page:

Get latest Price of Galaxy DX 949 from Amazon 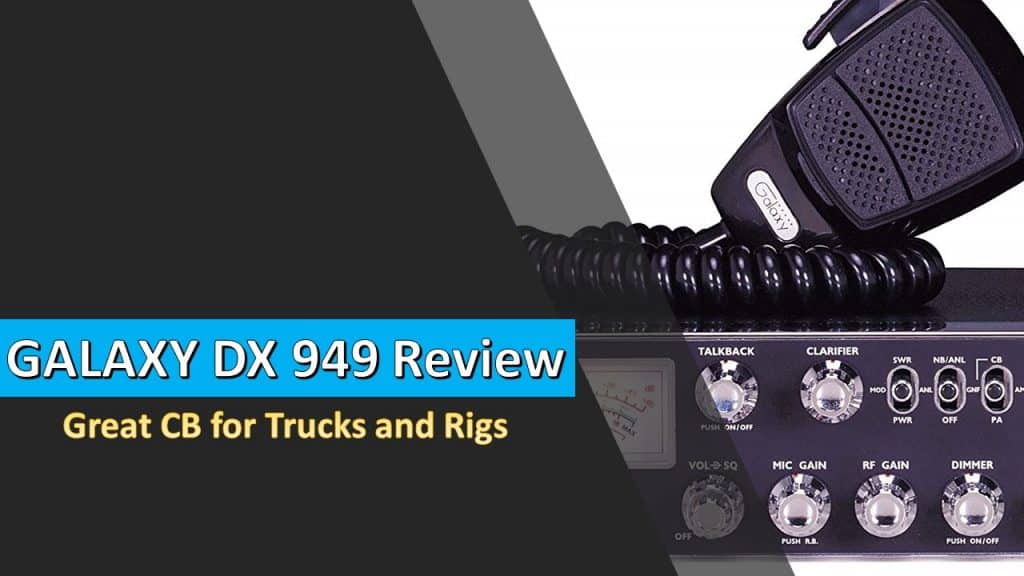 DX 949 is laid out with many features and flexibility; a six-digit frequency display on the back of the radio, LED talkback circuit, and power output scale for both AM and SSB.

These are just the features the brand boosts of. Let me tell you that there are more things to dig into. Let us have a thorough look at its performance and features.

DX 949 is a cost-effective and durable AM/SSB mobile radio with every feature you could ask for.

The first thing I should mention about 949 should be its modulation. The radio works both on AM and SSB modulations. SSB means more power and more power will give you a higher range. This is one of the most powerful CB radios in the market. (You can more CB radios of this kind here: Most Powerful CB radios by CB Radio Guru)

The DX 949 AM/SSB mobile radio comes with various helpful controls. This includes variable power control, talkback control with ON/OFF switch, roger beep with ON/OFF switch. These controls and knobs know their own task and perform accordingly. With these controls, you don’t have to look through menus and cycles continuously.

The noise can be controlled using noise blanker and Galaxy Noise Filter (GNF). The DX 949 mobile radio comes with the volume control, dimmer control and rogers beeps with ON/OFF switch. You will also see rear jacks given for external speakers.

This AM/SSB mobile radio is known for its SWR. This one works well compared to other CB radios. Whereas some of the CB radios give 1.6:1, the DX 949, SWR performs with 1.1:1 ratio. Yeah, this is a significant improvement over the other CB radios. The SWR circuit works well and its auto control feature helps with the quick SWR reading without you needing to recalibrate for checking each channel.

The AM/SSB mobile radio comes with the three LEDs that show you the performance of antenna or SWR circuit, roger beep ON/OFF switch and for transmitting and receiving signals. The analog meter system gives the accurate readings and is easy to read.

The CB will work excellent even in harsh environment. DX 949 works well for rigs on swing mod. What you will find awesome is that it is easy to use even for a first time user. With the d104 mic, users can hear loud and clear.

As I said before, the range of the CB is awesome. Some users also use it in a 5 miles radius from the hi-way. They could get the signals from all the going trucks. This is going to be very helpful for your business.

In addition to standard two-function noise reducer, the DX 949 mobile radio also has a Galaxy Noise Filter. This filter gives you clearer sound transmission and reception.

The SSB mod takes few minutes to set up at the start when the radio is turned on, and drift of the frequency once it is warmed up the DX 949 CB works well over few hundred miles.

Although with many positive reviews the DX 949 is quite large and heavy just like other Galaxy radio models. It is seen few times that Galaxy Noise Filter of DX 949 AM/SSB mobile radio does not work as expected and users often need to buy an external speaker for the better noise control. It is also difficult to install the DX 949 CB in new trucks due to its side mounted mic and small overhead space.

If neglected few downsides, it is the best mobile CB radio to use while you are driving in and out of the mine, on the highways no matter if your vehicle is rig or an Eagle 5900I dump. The audio strength and the signal range is good and clear modulation helps while driving.

The best part; you need not worry using the DX 949 mobile CB radio while driving. As I said before, the design including many controls and knobs makes it easier to use while driving.

I am sure the features and the reviews of Galaxy mobile CB radio have impressed you so far, it has its downsides also.

This product is highly recommended, for truck and car drivers both in their vehicles and at base stations.

Despite few of the negative sides, the DX 949 AM/SSB CB mobile radio is what every CB mobile radio users need, in an effective cost and durable build. The Galaxy has provided a two years warranty so in case you receive a damaged or non-working product, you can always ask for the replacement with the new one. The auto SWR calibration is very helpful and the signal transmission and receiving strength is remarkable.

We do recommend using this CB radio for long-range communication. This one works well for rigs, mines, and trucks. I’m damn sure that you will enjoy using it in the mentioned cases.

Get latest Price of Galaxy DX 949 from Amazon