You are here: Home / Blog / CB Radio Frequencies and CB Channels : Everything You Need to Know

Even a first-grade student knows that CB radios use 40 channels for communication. Since all the channels operate in the different frequency range, it is important to talk about CB channels and CB frequencies for proper radio usage. By the time you finish reading this article, you’ll be able to answer some of the most common questions like

“What CB Radio channel do most of the truckers use?”

“What is the maximum CB radio frequency range and why?”

For the case of simplification, the CB frequency range spectrum has been divided into 40 parts that make 40 CB Radio channels. Each channel has its fixed purpose, advising you to use the one you need. To not tune in to other channels accidentally, disrupting its purpose, let us study all the important aspects related to CB radio frequencies.

Before going deep into the main topic, I think it will be a good idea to understand frequency first!

Did you ever get stuck in a limbo trying to figure out what is that hype about the frequency in radios? Well, we’ve been there too. Transmission of signals require a medium and Frequency is just wavebands at which this happens.

This is the most important section of this article.Before proceeding to doubts and explanation, let’s look at the chart that addresses frequency distribution according to the channels and the channels’ use.

All the channels authorized for CB are ‘Open for all’. Everyone is allowed to access these if that particular channel either lie in their domain or tuning to that channel is important.

In this section, we’ve tried to outline the purpose of most of the channels. CB radios are not necessarily bought as toys or for reenacting famous movie cop-thug chasing scenes. CB radios are used by professionals too, such as truck drivers to keep updated about anything related to their field.

This has been the backbone of the initiation of creating separate channels for drivers, emergency or business. Let’s take a look at some of these.

CB radios provide emergency channels so that you do not get stuck somewhere out of rescuer’s reach. Most often we meet the dark side of fate when we forget our mobile phones at home. With CB radio providing an emergency channel, you can take this worry out of your mind and travel with ease.

Channel 09 of your CB radio is for emergency. It is monitored by different emergency services.

What CB Channel do Truckers Use? 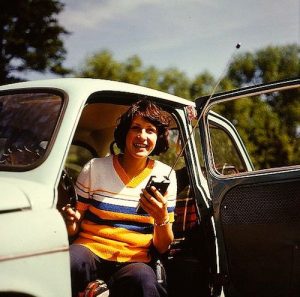 As we’ve already hinted, there is a separate channel for truck drivers. Channel 19 serves this purpose and can also be called as General Highway Channel. This channel is still useful even if we live in the era that is booming with a mobile phone and smartphone technologies.

Since we’re already familiar with road and traffic rules that includes cell phone usage while driving, we can guess why CB radios are still in fashion. Channel 19 helps truck drivers in communicating with each other. The communication may comprise of many elements ranging from information regarding road conditions, speed traps, and other travel information.

Channel 16 and channels 36 to 40 are also for SSB with channel 38 being for LSB too. Channel 21 and Channel 10 are for regional road whereas channel 17 is for North/South traffic. CB channel 13 and 14 are for Marine, RV and walkie-talkie respectively.

To avoid the fine proposed by FCC, you need to understand a key aspect. The frequencies higher than 28,000 MHz are illegal. These frequencies do not lie in channels of CB radios and are for licensed Amateur Radio/ ham Operators. They use Morse code technique and so, if you’re able to illegally obtain that much frequency, you’ll get under the focus of official observers.

Therefore, it’s necessary for you to stay in the 40 channels provided for CB users and not be overwhelmed if you are able to achieve higher frequency illegally.

CB radios can be modified for using it in Amateur Radio’s 10-meter range. However, doing so is only legal when it comes to licensed operators. CB radios that are approved for use in united states are marked as “FCC Approved”.

Everyone including ham operators is required to use FCC approved CB radios for all 40 channels. They are more difficult to modify than a non-approved one.

Most of these channels are “private” channels that can only be used by authorized persons or those that have a license. Even then, these strict prohibition and license requirement didn’t scare people enough to stop creeping into these channels.

However, on those frequencies, you’ll be allowed to listen but once you try to talk, you will be considered as an intruder. You’ll be under the radar of FCC which then hunts down the person illegally using channels and fine them.

Like many of us, you may also be wondering why ‘Freebanding’ has been tagged as illegal when it looks like something worth drooling over. Well, we have the answer!

Following are the two main reasons freebanding comes under illegal elements as by rules and regulations of FCC. They are as follows:

With a total of 40 standard CB radio channel options available, how is freebanding possible? If someone had asked this, I would’ve considered it as a great question.

It is a human psychology that whatever is termed as illegal or banned, people dig up ways to experience that. Same is the case with freebanding as well. There are most common two ways how people achieve tapping other channels illegally.

When a person is caught tapping other channels, he will be first notified by the FCC so that he refrains himself from continuing freebanding. However, if he/she continues, he will be charged with fine along with different penalties.

These penalties include confiscation of CB radios, more than $10k fine and suspension of any license in this domain.

So Why Do People Still Go for Freebanding?

Even after these severe penalties, some people still go for freebanding. The reason is that, because of a huge number of CB users, all 40 channels may sometimes become crammed with conversations and signals. This motivates operators to go for frequency out of the allowed limit zone to experience calm platform.

Another reason is that tapping secretly to restricted channel sounds like going for bungee jumping, dangerous and adventurous.

Though most of the countries have same CB frequencies as the U.S., there are, however, some differences in frequencies, power levels and modes (e.g. AM, FM, SSB). For this purpose, using gadgets and equipment that are not designed for that country can possibly be proved as illegal.

There are however other rules and regulations too proposed by the law that you need to focus on before you start using the CB radio. These also include giving priority to emergency messages on all channels.

For CB radios, frequencies and channels play an important role and it becomes crucial for you to understand how these work thoroughly to avoid risks and dangers. Before buying CB radio, check if it has been verified by the FCC. Try to avoid freebanding and you’ll be able to go for a perfect long drive, communicating with your friends without getting fined.